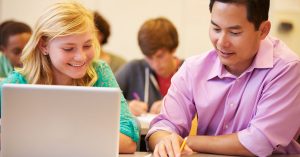 For most individuals who are may have a more mild level of learning disability or speech/language disorder, a combination of accommodations and academic support can help them learn and pass their foreign language courses successfully. A foreign language waiver may be appropriate for the following individuals with more moderate to severe issues: those with delayed speech, frequent ear infections in childhood, reading disorders, and/or writing disorders. Testing for a Foreign Language Waiver may involve the following tests: Modern Language Aptitude Test (MLAT), Wechsler Adult Intelligence Scale-Fifth Edition (WAIS-V), Woodcock Johnson Tests of Achievement-Fourth Edition (WJ-IV), Delis Kaplan Neuropsychological Test of Executive Functioning, Comprehensive Test of Phonological Processing-2nd Edition, and the Test of Orthographic Competence.

In order to evaluate whether an individual fully qualifies for a foreign language waiver, there must be evidence that the individual has difficulty with phonological processing, orthographic processing, and foreign language acquisition. However, just because someone has a speech disorder or reading disability, it does not mean they will not be able to learn a foreign language. This is why a Foreign Language Aptitude Assessment is essential in order to predict a student’s success and aptitude for learning a foreign language. At Dr. Angela Reiter & Associates in Eastchester we specialize in psychological evaluations and a Foreign Language Aptitude Assessment is one of the evaluations in our testing battery. Schools often require that a psychological evaluation be no more than three years old. So we can update past evaluations as well.

The Modern Language Aptitude Test is one of the tests we use at Dr. Angela Reiter & Associates to measure a student’s aptitude for learning a foreign language. It predicts success in learning all basic communication skills, but particularly speaking and listening. If an individual struggles with phonological and orthographic processing skills then their success at acquiring a second language will be greatly impaired. Most colleges and universities offer accommodations for a foreign language (such as tutoring, extra time, and other support services). Many also offer course substitutions for a foreign language for those who qualify. In order to qualify for accommodations and course substitutions, colleges often require a current psychological evaluation that clearly indicates a disability that involves significant difficulty with information processing, decoding, memory problems, reading and/or spelling skills.

The process of receiving a Foreign Language Aptitude Evaluation at Dr. Angela Reiter & Associates involves reaching out to schedule a phone consultation to go over background and finances and then scheduling an intake to discuss developmental and academic history. During the intake, we would schedule two test sessions to complete the needed tests to examine foreign language aptitude.